E. coli is a type of bacteria that’s found in the digestive tract of warm-blooded animals — including people. If high levels of E. coli are found in a stream or river, there’s the potential for disease-causing pathogens to also be present. In 1996, Four Mile Run was listed as an “impaired water” for E. coli and a Total Maximum Daily Load (TMDL) was established for the nontidal portions of the stream. More information about the Four Mile Run TMDL can be found on the Northern Virginia Regional Commission website.

Where Is the Bacteria Coming From?

What Do High Bacteria Levels in the Water Mean to Me?

It means there’s a greater possibility that illness-causing pathogens could be in the water. While there’s no guarantee the water will make you ill, it’s a sign that additional care should be taken. Always wash your hands after working or playing in our streams.

Should I Be Worried?

No. Activities that involve touching the water – like fishing or skipping rocks – are safe. But always thoroughly wash your hands after coming into contact with stream water and never drink it. We don’t recommend swimming or dunking your head or body into stream water. Learn more about enjoying streams safely.

Below are some results from volunteer-collected E. coli data. We use the Virginia Department of Environmental Quality (DEQ)-recommended Coliscan Easygel kit with our volunteer program. While not laboratory quality, the Coliscan Easygel test results are a reliable, low-cost indicator to determine if further testing or investigation is warranted.

When Are Bacteria Levels Highest? Warm Months, After Rain

Across Arlington, our volunteer monitoring data shows that bacteria levels are highest:

Those are the conditions that we tend to see peaks in bacteria levels and the most exceedances of water quality standards.

Where Are Bacteria Levels Highest? 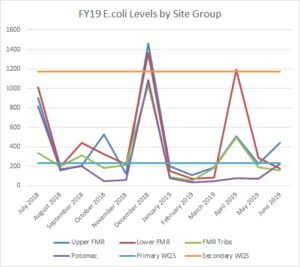 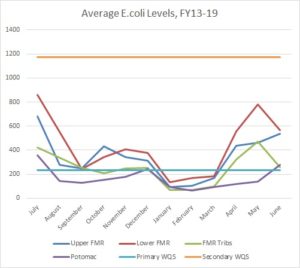 Note the December 2018 peak in response to heavy rainfall.

Even when bacteria levels may be low, it’s still present. Stream users should always be careful to wash hands after playing in the stream.