In late summer, young snakes often find their way into basements. Gulf Branch Nature Center is no exception. In the past two weeks we have removed several young Ring-necked Snakes (Diadophis punctatus edwardsii) from our basement, releasing them in the surrounding forest. 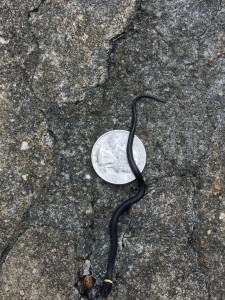 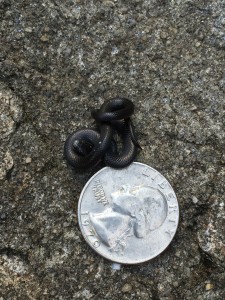 Other common snake species with young small enough to find their way into our basements include: 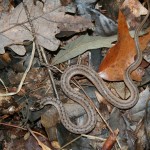 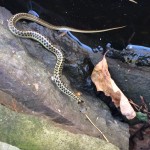 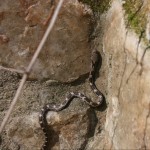 These three snakes don’t initially seem to have a lot in common. Northern Brownsnakes live under rocks and logs in forests, fields and suburban areas, feeding on slugs and worms at night. They rarely exceed 15 inches in length. Eastern Gartersnakes live in a variety of habitats including forests, fields, wetlands and urban and suburban areas. Their diet is just as varied, including invertebrates, fish, frogs, salamanders, and lizards. Gartersnakes can reach lengths of 4 feet. Eastern Ratsnakes can reach lengths in excess of 6 feet. They live in fields and forests. Excellent climbers, these snakes will feed on birds and bird eggs, as well as rodents.

What these three species do have in common is that they are nonvenomous and harmless. As juveniles they may feign a strike, never actually opening their mouth, but are far more likely to try to escape than bite. They also share the unfortunate coincidence of being mistaken for juvenile Northern Copperheads (Agkistrodon contortrix mokasen). Most tales of these mistaken identities do not end well for the snake.

Copperheads are mostly uncommon in Arlington, and juveniles can be quickly identified with two simple ID tips:

The first and easiest tip is to look for bright yellow on the tail. This bright yellow tip is used by young copperheads to draw prey in closer before striking. Second, note the presence and shape of dark bands on the back of the snake. They narrow as they approach the spine, producing an hourglass or saddlebag pattern. The nonvenomous snakes shown above have patterns with spots, not bands.

You are far more likely to find a nonvenomous snake in your basement. Avoid using glue traps. Snakes suffocate and suffer needlessly in them. Even if rescued from a glue trap, a snake will often have severe and irreparable damage to its scales. Gently use a broom to guide snakes into a waiting bucket or box and deposit them outside, away from your home in a grassy or wooded area.

The Eastern Ratsnake (Pantherophis alleghaniensis) is our longest and one of our most commonly seen snakes. Formerly called the Black Ratsnake (Elaphe obsoleta), both it’s common and scientific names have been changed and formalized. But many people still refer to it as a Black Rat Snake or simply Black Snake. It is the longest snake in the region, the only one that regularly grows to over 6′ in length. The world record is one that measured 101 inches from its snout to its vent. The Virginia record is a 67.3 inch one. Its large size along with the ability and tendency to climb trees makes this snakes among the most visible in our area.

Eastern (Black) Ratsnakes are excellent climbers and are often seen basking in trees.

This is a beneficial creature to have around. As the name suggests, they are superb at controlling rodents, being able to get into their burrows and tackling even large rats, killing their prey by constriction. They are however also opportunists, feeding on whatever is available and small enough for them to eat, including birds, eggs, salamanders, shrews, chipmunks, and sometimes larger prey. Because they are such good climbers, they sometimes get themselves into trouble with people who put up bird boxes that haven’t been protected sufficiently, eating the occupants.

Luckily many people realize the benefits of having rat snakes around. Sometimes they’re referred to as the “Farmer’s Friend” and purposely released into barns and out buildings. Their shiny black coloration, with a bit of white on their chin/neck and partial checkerboard pattern on their bellies helps to distinguish them from some of the other black snakes around.